The City of Statesville, North Carolina begins to take shape with the construction of Fort Dobbs in 1755. In 1788, Iredell County was named for James Iredell, the Associate Justice of the first Supreme Court during George Washington’s presidency. In 1789, Statesville was officially established with Fergus Sloan selling 68¾ acres to the county commissioners. It is said that Mr. Sloan also set up the first 250 gallon copper and tin still ever erected in North Carolina, brought over from Ireland. In 1822, the Temperance Movement was initiated in North Carolina and in 1833, Statesville began laying track for the railroads to connect the Piedmont area to the rest of the country.

These were busy years for the City of Statesville. A fire almost burned down half the city in 1854, the Western North Carolina Railroad, linking Salisbury to Asheville, is finally completed in 1858 and the Wallace Brothers Botanical Company opened in 1859 and became one of the largest root and herb distribution centers in the United States. Meanwhile, in 1872, local vote prohibits liquor sales in Statesville for a radius of 2 miles and the closest legal saloon was south of town.

In the years 1876 and 1878, the Herbarium won exposition medals in both Philadelphia and Paris and grew so large it moved into a 54,000 square foot building. The Wallace family continued to run it until 1943, which helped North Carolina to remain a leader in herbs.

Statesville is branded as the “liquor capital of the world”! Being the last railroad stop before heading west, it was said that 57,000 gallons of whiskey shipped in 7 months’ time through the Atlantic, Tennessee and Ohio Railroad, not including the amount via the Western Railroad. Several wholesale liquor houses also moved to the city, such as W.W. Cooper & Co., Lowenstein & Co., Key & Co., J.C. Somers & Co. and H. Clarke & Sons, among others. In 1884, Key & Co. shipped “two cat-loads” (about 30,000 gallons) of apple brandy out in a single day! Saloons are approved by state legislation and bars quickly open in town. City Hall was built in 1892 and in 1893 one of the Wallace sons established the Statesville Cotton Mill and helped found the public school system. 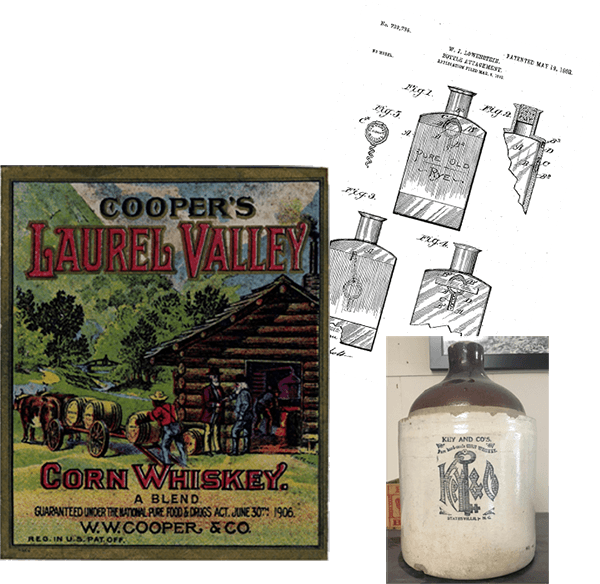 Since the mid-1800s, Statesville led the state in tobacco and whiskey production, however not everyone supported the latter. During these years, the North Carolina Anti-Saloon League was established and the Watts Act passed in 1903, which prohibited the manufacture and sale of liquor outside of incorporated towns. The Act was named after Iredell County’s state representative, Alston D. Watts, who sponsored the bill to fend off the more drastic London Bill. On January 1st, 1909, statewide Prohibition went into effect – making North Carolina the first state in the South to pass Prohibition. In 1911, the Statesville Depot was completed by Southern Railroad Corporation. At midnight on January 17th, 1920, the Eighteenth Amendment to the United States Constitution came into force, which declared the production, importation, transportation and sale of alcohol illegal nationwide. Eventually, due to overwhelming national opposition, the Twenty-first Amendment was passed in 1933, completely repealing the Eighteenth Amendment. It is unique as the only constitutional amendment that repeals a prior amendment.

Four years after the Twenty-first Amendment was passed that ended nationwide Prohibition, North Carolina set up the Alcoholic Beverage Control System in 1937 and only then was the Twenty-first Amendment officially recognized in the state. Statesville, however, did not organize its first ABC board for alcohol sales until 1973 – almost 40 years later! In 1978, a 70-year-old statewide ban on mixed drink sales ended and after a popular vote in 1986, Statesville bars and restaurants began serving mixed drinks (8 years after the fact!). The City of Statesville is proudly named an All-America City in both 1997 and 2009. After falling into disrepair, a mass city effort saved the historic Statesville Depot in 2010. After restoration, the historic depot was restored and moved. Today, it serves as the headquarters for the Statesville Police Department Patrol Division.

Southern Distilling Company is founded in 2013 by Pete and Vienna Barger and Statesville’s deep and renowned distilling roots are revived in a new, state-of-the-art destination craft distillery. North Carolina’s craft spirits are thriving and October 2016 is proclaimed North Carolina Spirits Month. In April 2017, Southern Distilling Company opens for daily tours, tastings and specialty gift shopping. It is the first licensed distillery in the “liquor capital of the world” since 1903!

Learn more about booking a tour and tasting at our state-of-the-art distillery.

We’d love to host your conference or special event at our brand new beautiful distillery.  See our Event Space rental packages or Contact Us for more information.