Yesterday, November 12th, was National Happy Hour Day! Since the distillery is closed on Sundays, the Team at Southern Distilling is observing and celebrating this special date today!

Wikipedia states that the two words have appeared together for centuries… in fact, as far back as possibly 1599 when it is said to be the year William Shakespeare’s wrote King Henry V. King Henry says, “Therefore, my lords, omit no happy hour That may give furtherance to our expedition…”

However, another possible origin comes from the United States Navy in 1913 when a group of homemakers called the “Happy Hour Social” organized bi-weekly events on board the USS Arkansas. By June, the crew began referring to this entertainment (which included boxing and wresting matches, music, dancing, movies and without a doubt, a fair share of whiskey) to “Happy Hours” and by World War I, the practice had spread throughout the entire Navy.

When the 18th Amendment passed in 1920, the idea of drinking before dinner gained its roots. It was illegal for restaurants to serve alcohol, so people would host “cocktail hours” or “happy hours” at a speakeasy to knock back a few whiskey cocktails before heading out to eat at a restaurant. The tradition slowly adopted the name, possibly nodding thanks to some sea-loving veterans!

Centuries later, we wish YOU a fantastic Happy Hour Day! Come celebrate with us by booking a tour and tasting at Southern Distilling Company to pay homage to this time-honored tradition! Book online HERE. 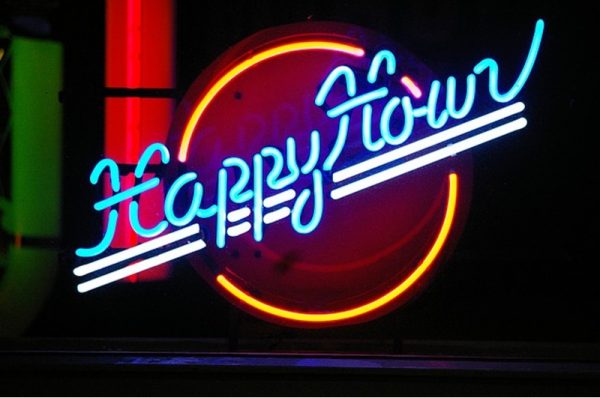